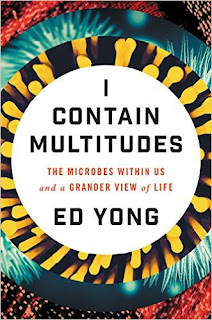 With apologizes to our colleagues in the Southern Hemisphere, many of us are traveling a bit this summer and are looking for good things to read. At the top of my reading list is Ed Yong's new book, "I Contain Multitudes: The Microbes Within Us and a Grander View of Life." The book by the highly regarded UK science journalist (The Atlantic, National Geographic) digs into the relationship between microbes and animals. Unfortunately, the book won't appear until August 9th, so you'll have to be a bit patient and find something else to read.

In the meantime, I've listed five recently published journal articles/studies that will hopefully tide you over until "I Contain Multitudes" appears at your bookstore.

1) A Flawed Revision of the Common Rule (Joffe and Magnus, Annals 19 July 2016). The Common Rule is the regulatory framework that guides human subjects research, think IRB. Last September, 16 federal agencies released a Notice of Proposed Rulemaking outlining proposed changes to the Common Rule. There are several potentially important changes that could negatively impact infection prevention and stewardship studies. First, the Notice seeks to redefine all research on biospecimens, including de-identified specimens, as human subject research requiring "broad consent" before storing the specimens. The discussion didn't mentioned microbiology specimens specifically, but this requirement is concerning. Second, the Notice would only exclude QI research from review if it analyzed proven interventions and limited study endpoints to utilization outcomes (e.g. cost). However, QI projects such as quasi-experimental studies of the impact of CLABSI checklists on BSI rates or mortality WOULD require IRB review and potentially individual informed consent. (Yikes!)  My sense is this could drastically curtail important research in MDRO prevention and most infection control research. Stay tuned.

2) Control of an Outbreak of Middle East Respiratory Syndrome in a Tertiary Hospital in Korea (Park GE et al. Annals, 19 July 2016). From May to July 2015, 186 confirmed cases of MERS-CoV occurred in S. Korea. The authors provide an in-depth description of a 92-person outbreak in a single tertiary-care hospital in Seoul. Interestingly, 82 of the cases occurred after exposure to a single secondary patient cared for in their emergency department. All cases were identified through contact tracing and monitoring of exposed patients and healthcare workers and all in-hospital transmission was secondary to three patients with pneumonia and productive cough. The description of events was very sobering.

3) Colonization With Methicillin-resistant Staphylococcus aureus and Risk for Infection Among Asymptomatic Athletes: A Systematic Review and Meta-analysis (Karanika S et al, CID 15 July 2016). The results of this study suggest that you shouldn't be an athlete (6% MRSA colonization rate), especially a wrestler (22% MRSA colonization rate). Additionally, the authors reported that colonization increases the risk of subsequent skin and soft tissue infection 7 times. If only it were safer to lay around on the beach this summer.

4) Addressing Infection Prevention and Control in the First U.S. Community Hospital to Care for Patients With Ebola Virus Disease: Context for National Recommendations and Future Strategies (Cummings KJ et al. Annals 5 July 2016). Authors from the CDC, Texas Health Presbyterian Hospital in Dallas and other other institutions describe the massive infection prevention response that followed the infection of two MICU nurses who cared for the index patient from Liberia. The responses included protocols for specimen handling, managing medical waste and standardized PPE with education and monitoring. Nothing particularly novel in 2016, but the article certainly highlights the massive efforts and costs associated with the N=1 response that was required because of a chronically underfunded public health and infection prevention infrastructure.

5) A Novel Microbiome Therapeutic Increases Gut Microbial Diversity and Prevents Recurrent Clostridium difficile Infection (Khanna S et al. J Infect Dis 15 July 2016). The authors describe an alternative method to fecal transplants that could potentially avoid donor screening among other barriers. They tested SER-109, which is encapsulated spores captured from healthy human donor stool that was treated with ethanol to eliminate pathogens, for the prevention of recurrent CDI. The cohort of patients had to have had >3 CDI cases in the prior 12 months and a clinical response to antibiotic therapy for their current CDI episode immediately prior to dosing of SER-109. The 15 patients in cohort 1 received high-dose capsules (15 on day 0 and 15 on day 1) and 15 patients in cohort 2 received lower dose capsules on a single day. Overall, 87% achieved the endpoint of no CDI at 8 weeks. If you're interested in reading more, there is an excellent accompanying editorial.
Email Post
Labels: annals CDI CID Ebola virus Ed Yong fecal transplant IRB JID MERS MRSA reading list summer reading