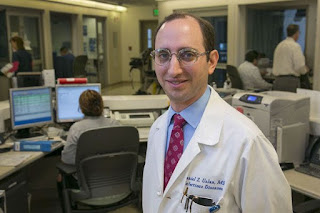 Dan Uslan's group at UCLA has just published a new paper in Infection Control and Hospital Epidemiology on the elimination of contact precautions for MRSA and VRE at their health system (2 hospitals).

They looked at the rate of positive clinical cultures for MRSA and VRE one year before and after contact precautions were stopped on July 1, 2014. Importantly, at around the same time they expanded daily chlorhexidine bathing from ICU patients to all inpatients.

Comparing the pre- and post-intervention periods in this quasi-experimental study, here are the key findings:

Now one could argue that the benefit of contact precautions was replaced by the beneficial effect of chlorhexidine bathing. That doesn't bother me. I'd gladly trade 24 hours of gowns, gloves and confinement to a small space for a 5-minute wipedown with chlorhexidine.

This is the fourth paper that shows a consistent finding of no increase in MDRO infections after contact precautions are stopped. The others can be found here, here, and here. And there are two more studies in abstract form. It seems to me that we simply don't need contact precautions for MRSA and VRE given newer developments in infection prevention (chlorhexidine bathing, better compliance with hand hygiene, private patient rooms, and enhanced environmental disinfection). Hopefully, the addition of this new study will convince other hospitals that the world doesn't end when contact precautions are retired.