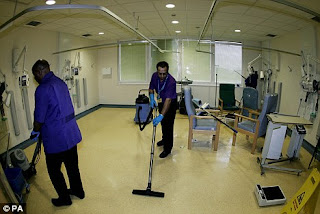 Years ago, when faced with an MDR-Acinetobacter baumannii outbreak, I recommended that our hospital implement shoe covers in the outbreak unit (along with other measures) since the floors were covered with Acinetobacter. Since then, I've been almost surprised by the continued lack of attention that floors (and even contaminated shoes) have received from my infection prevention colleagues. Fortunately, it seems, some folks are finally noticing and estimating the role that contaminated floors play in pathogen transmission in hospital settings. And by "some folks", I mean Curtis Donskey's group at the Cleveland VA.

In a study, just published in ICHE, Sreelatha Koganti and colleagues used non-pathogenic bacteriophage MS2 to measure the speed of spread from isolation room floors to patients' hands and high-touch surfaces inside (and outside!) their rooms.

First, I would like to quote from their background:

"Notably, hospital floors are often heavily contaminated but are not considered an important source for pathogen dissemination because they are rarely touched. However, floors are frequently contacted by objects that are subsequently touched by hands (eg, shoes, socks, slippers). In addition, it is not uncommon for high-touch objects such as call buttons and blood pressure cuffs to be in contact with the floor (authors’ unpublished observations). Therefore, we hypothesized that floors might be an underappreciated reservoir for pathogen transmission."

And now their results:

"MS2 was detected on multiple surfaces of all patient rooms by 1 day after inoculation... Contamination was common on high-touch surfaces in adjacent rooms, in the nursing station, and on portable equipment. Portable equipment included wheelchairs, medication carts, vital signs equipment, and pulse oximeters."

Now, after years watching our non-responses to epidemiological data such as these, I can already foresee the responses. Most will continue to do nothing waiting for some mythical/magical cluster-randomized trial, which can't be done for economic reasons (try powering such a study). Others will ignore these results completely. And a few brave souls will soldier on with more excellent epidemiological investigations, like this study from Cleveland, hoping that people will eventually notice. Oh, and some will install copper floors.

Maybe we could start with cleaning patient-room floors daily?