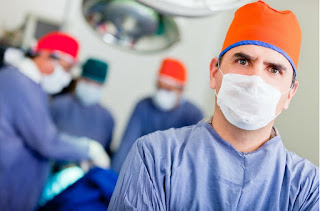 There's a feud brewing between two professional societies on appropriate attire in the operating room. Earlier this year, AORN (the Association of periOperative Registered Nurses) issued updated guidelines on OR attire. The guideline forbids the wearing of skullcaps because the head covering should cover the head, hair, ears, facial hair, and nape of neck when personnel enter the semi-restricted and restricted areas of the OR. This didn't sit well with some surgeons, and the American College of Surgeons (ACS) issued their own statement on OR attire earlier this month. With regards to the skullcap, they state, "the skullcap is symbolic of the surgical profession. The skullcap can be worn when close to the totality of hair is covered by it and only a limited amount of hair on the nape of the neck or a modest sideburn remains uncovered. Like OR scrubs, cloth skull caps should be cleaned and changed daily. Paper skull caps should be disposed of daily and following every dirty or contaminated case."

From AORN's perspective, the issue with skullcaps is the exposed ears and exposed hair at the base of the head, from which pathogens may contaminate the surgical field as hair and skin squames are shed. The counterargument, of course, is that there is no evidence to suggest that skullcaps have been associated with surgical site infections. And now we find ourselves in essentially the same quagmire as with white coats.

This week, AORN shot back, and they punched the good old boys right in the gonads. Says AORN, "head coverings based on symbolism and a personal attachment to historical norms have no place in the patient benefits analysis expected of guidelines developers." AORN rightly took the moral high ground and called out the ACS for using a professionalism argument to justify their stance. As I have argued before with regards to the white coat, professionalism exists to protect the profession, not the patient. So while the surgeons' argument with regards to lack of evidence has validity, the professionalism argument does not. And my thinking about the skullcap is the same as for the white coat: the biologic plausibility for causing infection should lead to a suggestion to avoid the skullcap but not a mandate. While AORN may argue that their recommendations are guidelines, the reality is that the Joint Commission enforces them as mandates.

I'm not a surgeon, but if I were, I'd give up my skullcap, just in case bacteria were falling off my earlobes. And I think these issues are much easier to resolve if we simply follow the dictum, the patient comes first in everything that we do.

While I'm on my moral high horse, and since I'm an equal opportunity critic, I'd be remiss if I didn't point out an issue with the AORN. You may have noticed that there is no link to the AORN attire guideline in this post, and that's because AORN sells their guidelines for $225. It seems to me that when any professional society has something so important to say that it is written into a guideline, they have a moral imperative to make the guideline accessible free of charge to everyone, particularly when the guideline impacts patient safety. This is but another example of the ugly side of professionalism, a decrepit concept that continues to haunt us.
Email Post
Labels: AORN attire clothing professionalism surgeon's skullcap surgical attire