When a dead horse is your only horse...

I’d like to thank Tom Talbot and Hilary Babcock, two of the authors of SHEA’s position paper on mandatory influenza vaccination of healthcare workers, for their response to my recent post on why I think this policy is misguided. Hilary and Tom are excellent hospital epidemiologists that I respect. Nonetheless, on this issue, I remain unconvinced by their arguments.

They point out that that I mischaracterized SHEA’s position being based on four nursing home cluster randomized trials, when in fact the position paper has 63 references. There are, indeed, 63 references, the majority of which do not address the impact of vaccinating healthcare workers on patients. In fact, most of the references lay out the biologic plausibility that vaccinating healthcare workers should have an impact on patients, as well as other issues, such as the impact of mandatory programs on vaccine rates. The biologic plausibility arugment is very nicely laid out in their blog post, and I agree with it completely. So, I’ll be more precise: SHEA’s best evidence for their policy is contained in the four cRCTs.

Tom and Hilary go on to cite newer studies that they believe support SHEA’s position, one of which is a cluster randomized trial from the Netherlands. I was not familiar with this paper so I reviewed it. In this trial, 6 hospitals were randomized—3 had an intervention to increase vaccination rates in HCWs and 3 did not. Significantly higher vaccination rates were demonstrated in the intervention hospitals. The patient outcomes were divided into adult and pediatric patients and the outcomes reported for patients were influenza and/or pneumonia and pneumonia. Influenza was not an outcome. Thus, the influenza rates cannot be determined. If the two outcomes are mutually exclusive, then the influenza rate is actually higher in the intervention hospitals (though not likely significantly so). For children, there was no difference between the intervention and control hospitals. And interestingly, the intervention hospitals had significantly higher HCW absenteeism rates, a metric Hilary and Tom argue as important for demonstrating the effect of employee vaccination. Thus, I don’t think this paper in any way supports mandatory vaccination. 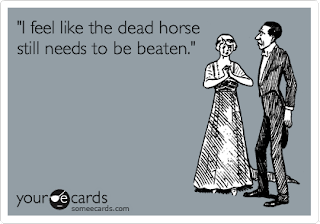 Despite the studies published in the seven years since the SHEA position paper was published, there remains an irrefutable fact: there is no high level evidence demonstrating that vaccinating healthcare workers reduces influenza in hospitalized patients. I agree with Hilary and Tom that the four nursing home studies are a dead horse. Unfortunately, however, that dead horse is their only horse.

Everyone has opinions about infection prevention interventions biased by their own experiences and perceptions, and I’m glad that Tom and Hilary pointed out one of mine—bare below the elbows. As I write this post while on service, I’m, you guessed it, bare below the elbows! There’s clearly biologic plausibility that clothing can transmit pathogens to patients, but there is no evidence that following a bare below the elbows approach to patient care lowers infection rates, and in every talk I give on this topic I make that very clear. I would never argue that HCWs wearing white coats should be fired; otherwise, Tom and Hilary would have to be fired (based on their photos). And unfortunately, they missed the entire point of my post. I’m not arguing against vaccination of HCWs. My point is that you can’t mandate an intervention (and in this case threaten a person’s livelihood) when the intervention is not supported by high level evidence. In other words, you can’t mandate on opinion, but that’s exactly what SHEA did. Expectations for compliance with an intervention must be correlated with the strength of the evidence.

SHEA made a huge mistake when they published this position. And seven years later, there’s still no published evidence that can bail it out. It was wrong seven years ago, and it’s still wrong. Healthcare workers in the US deserve better, especially from a professional society that prides itself on using science to guide practice.