Prevention is paramount – I do believe this, and I know that is so much of what healthcare epidemiologist strive for; however we often become very myopic and focus exclusively on “modifiable risk factors.” It is refreshing to read a nicely done epidemiologic study to illustrate what an impact the infectious disease community can have by improving the way we approach patient treatment. When reading the recent article in JAMA IM by Michihiko Goto and colleagues I was expecting a nice ecologic study showing an impressionistic picture of how improved treatment processes correlate with improved MRSA bacteremia mortality - but our VA colleagues working with big data have painted more of a realistic

than an impressionistic picture. Using the VA database, capturing deaths occurring during both the inpatient stay and the post-discharge period, they quantify improved survival at the patient level is driven by improved processes of care for S. aureus bloodstream infection (Association of Evidence-Based Care Processes With Mortality in Staphylococcus aureus Bacteremia at Veterans Health Administration Hospitals, 2003-2014 JAMA IM).


I have been pushing for transitioning efforts to prevent S. aureus (more specifically MRSA) bacteremia to the post-discharge setting, worried that the recent reductions observed among hospital-onset MRSA BSI are not being realized in the post-acute care setting. We’re getting stuck; in fact we have been stuck for a while at preventing community-associated MRSA BSI (See figure). 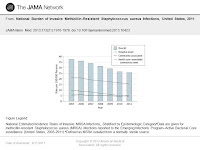 Goto and colleagues provide some clarity to preventing deaths related to MRSA BSI (and S. aureus BSI overall) even during periods of prevention stagnation such as we may be in currently. Of note, the incidences of healthcare-associated and hospital-onset MRSA BSI decreased in VHA hospitals between 2003 and 2014, whereas the incidence of CA bacteremia was stable. This is identical to trends illustrated nationally using CDC's EIP data, suggesting the VA analysis may be reflective of what is going on nationally.

Goto utilized the national Veterans Health Administration (VHA) health care system to first determine how to best risk adjust mortality; and then determine the independent effect of each of three pillars of guideline directed processes of care for managing S. aureus bacteremia (SAB): (1) appropriate antibiotic therapy, (2) echocardiography, and (3) consultation with ID specialists. They report lower risk-adjusted mortality among patients with SAB when they received (1), (2), or (3), and there was a nice dose-response relationship between the number of care processes and mortality. They estimate “57.3% of the decrease in risk-adjusted mortality among patients with SAB between 2003 and 2014 could be attributed to increased use of these evidence-based care processes.”

Their paper also sheds some light on the importance of capturing post-discharge data when quantifying mortality related to processes or infections related to the hospital setting!. Risk-adjusted mortality decreased from 23.5% in 2003 to 18.2% in 2014, regardless of MRSA, MSSA, and place of acquisition (Figure).

I was caught by the discrepancy between these mortality rates and the mortality reported by the CDCs Emerging Infections Program invasive MRSA Surveillance, reported around 12%. The latter is limited to in-hospital or 30 day mortality, whichever comes first. Recent data at IDWeek by one Emerging Infection Program site identified another 30% of deaths among patients with MRSA BSI occurred post-discharge. The Goto paper captures these deaths, making their conclusions more realistic. In addition, their risk adjustment for mortality included over 13 comorbidities, timing of infection, and susceptibility. They did an outstanding job of trying to evaluate the relative importance of each care process while accounting for changes/absence/presence of these underlying predictors of mortality (both inpatient and post-discharge). They even did a sensitivity analysis to account for early deaths, before these care processes could occur. Furthermore, the impact of receiving the care processes was similar regardless if the SAB was hospital-onset or community-onset!

The bottom line – following evidence base care processes does save lives. Their analysis support their conclusion that “there is a need for continued implementation of quality improvement initiatives to increase the adoption of these evidence-based care processes for patients with SAB.” Let’s be bold and call these what they are: performance measures! Here we have a potential metric (proportion of SAB receiving said care process), that are closely linked to improved survival, and can be captured electronically in an objective manner (at least in the VA!) improving the reliability of these metrics across facilities. I was glad to find through a google search that IDSA recently (December 2016) urged CMS to move in this direction -- although the details of the status of this proposed measure (#407) are not clear to me.

While we anticipate novel therapeutics for MRSA BSI including immunotherapy adjuvants or vaccines to become available in the not to distant future; quality improvement efforts in the evidence-based processes of care for SAB now will likely improve our patient’s outcome. I hope we can turn our attention here soon -- and have hospitals rewarded for doing so.