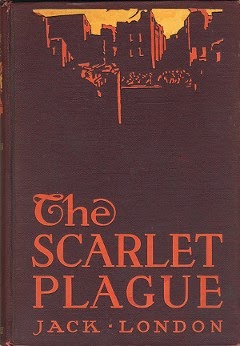 Post-apocalyptic fiction is all the rage these days. Before the Divergent series, The Hunger Games and The Road by Cormac McCarthy and even before Orwell's 1984, there was The Scarlet Plague (1912). Michele Augusto Riva and colleagues have just published a wonderful review of post-apocalyptic (post-plague) fiction in the October EID. Specifically, the authors focus on the literary history of pandemic infectious diseases from the Bible and Thucydides' History of the Peloponnesian War to Mary Shelley's Last Man (1826) and Jack London's The Scarlet Plague.

The Scarlet Plague takes place in 2073 after a 2013 "Red Death" pandemic that depopulated the earth in 2013. The novel tells "how the pandemic spread in the world and about the reactions of the people to contagion and death." Initially, people were convinced that scientists would be able to treat the bacteria (public trust in science was apparently high in London's version of 2013) but quickly the bacteria spread killing all within hours. Both London's novel and Riva's review are worth reading. There are many insights to be gained by looking at past responses to outbreaks (2009 H1N1, SARS) and fictional responses, as in London's novel, as we face current and future threats like Ebola, MERS and avian influenza.
Email Post
Labels: CDC EID Jack London pandemic post-apocalypse