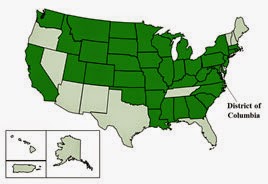 Yesterday, CDC released updated statistics that describe the emergence of EV-D68 in the US. Last month the virus appeared in Missouri and Illinois but quickly spread with 226 confirmed cases now in 38 states. Clearly these numbers underestimate the extent of EV-D68 illness since most hospitals are unable to test for this virus and once it's confirmed in a region, additional testing provides few benefits.

The NY Times reported that the University of Chicago Medicine Comer Children’s Hospital had to go on diversion three times in the last month because their emergency department was filled with children suffering from acute respiratory illnesses. Prior to this outbreak, they hadn't diverted ambulances in 10 years. It is possible that other viruses are contributing to the problem; however, CDC reports that of the specimens sent to their lab about half were EV-D68 positive and a third were positive for other enterovirus or rhinovirus strains.

The NYT article also mentioned that Children’s Hospital Colorado saw ~3,600 children in the past month with approximately 10% requiring hospitalization. Christine Nyquest, the hospital epidemiologist quoted in the article, stated that her hospital was facing a bed crunch and having difficulty maintain adequate supplies of albuterol.