Ebola vaccine - do we really need a placebo-controlled RCT? 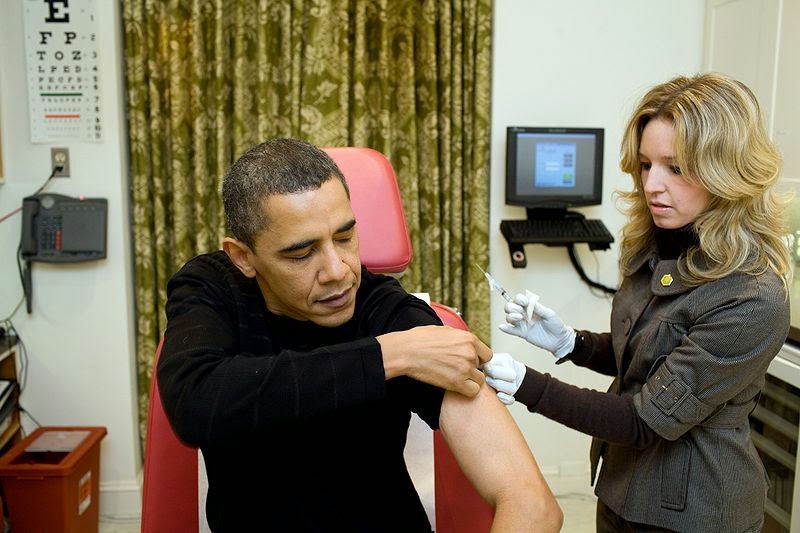 The last time that I waded into the world of vaccine effectiveness, it maybe didn't go as well as planned. Though I've learned that I get knocked down, but I get up again just as Chumbawamba tells me to do every morning.

There are several candidate Ebola vaccines in various stages of evaluation. Recently, in response to the huge increase in cases, there have been calls to speed the evaluation, manufacture and distribution of vaccines to help control the outbreak. Science, NPR and even Gizmodo had recent posts describing the urgent need to rush vaccines to the field and the barriers to widespread testing and distribution of novel vaccines. Mike Osterholm has a sobering article in Politico where he outlines the public health crisis and strongly argues for the production of 500,000,000 vaccines. He reminds us that this effort "will require mobilizing people and resources on a massive scale (and) it has to be the international community’s top priority."

Scientists, companies and governments met at WHO this week to establish ways to speed up the development and testing of the candidate vaccines. Major barriers include paperwork (agreements) and things like insurance coverage for possible vaccine side-effects. Thus, most barriers are not scientific in nature, which is encouraging.

However there may be another barrier to the testing of novel Ebola vaccines: the individual randomized double-blind placebo controlled trial. Now, we all understand that this study design is the gold standard for internal validity; however, sometimes ethical or logistical concerns may outweigh internal validity. This Ebola outbreak may be one of those times. But let me explain.

In several of the articles, Dr. Anthony Fauci, Director of NIAID, and several others have stated their preference for the placebo-controlled RCT. On NPR Dr. Fauci said "Some scientists think moving forward without a control group of people who don't get the vaccine isn't worth the risk - if you did it in the way where you never could tell whether it worked well, worked a little, didn't work at all, or actually made people worse ... you could actually propagate a disaster." In the Science article Dr. Fauci was said to believe "that a randomized, controlled trial, in which people receive either the actual Ebola vaccine or an unrelated shot such as the hepatitis B vaccine, will be needed and if you are going to deploy a vaccine widely within a country, you better be sure it’s effective." I agree with most of what Dr. Fauci is suggesting, although I think placebo controls and individual (vs cluster) RCT have significant limitations in this outbreak.

For example, I don't think placebos are acceptable during the 2014 pandemic in Africa. There is no practical way to administer Hepatitis B vaccine as a placebo in this desperate situation - I suspect there might be riots. Additionally, a placebo controlled RCT is not the only study design with strong internal validity. One option is the cluster-randomized trial (cluster-RCT) where vaccine is administered to some communities and not others. Given that there will initially be limited vaccine supplies, this distribution pattern could be more practical. For example, some towns in each country could receive vaccine and others won't (no placebo - just no vaccine) and infection rates could be compared in both groups. 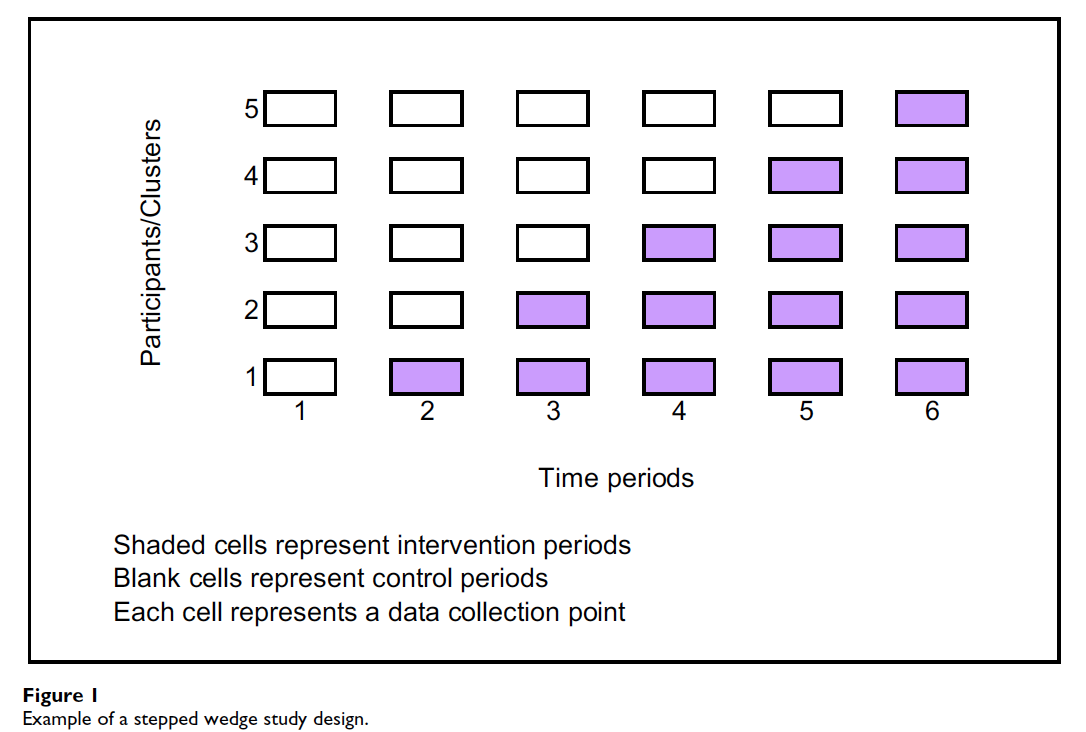 To get a litter more technical, Ebola vaccine cluster-RCTs could follow a stepped wedge design. Stepped wedged designs are used when ethical, financial, or logistical (e.g. geographic) constraints prevent the use of individually randomized or parallel cluster-RCT (i.e. treatment and control groups enrolled at the same time). In this design, vaccine would be rolled out randomly to communities as it became available (purple boxes in the figure above from Brown and Lilford), so that after one community is vaccinated then the next community would be vaccinated and then the next. Eventually every community is vaccinated. In this design, time-periods before the community is vaccinated serve as controls (white boxes in the figure). The stepped wedge cluster-randomized design has been used effectively in numerous settings including HIV and other infectious diseases.

This post is already too long. For those still interested in stepped wedge designs, please read the Brown/Lilford study or the Hussey/Hughes review. I'm sure scientists and political officials are considering numerous options for testing the safety and efficacy of candidate vaccines while simultaneously delivery potentially life-saving immunity to the millions at risk. Given that an estimated 21,000 people have already been infected and that 1.4 million may be infected by January 2015, I hope that vaccine trials aren't delayed because some insist on an individual RCT. The really good internal validity of the stepped wedge cluster RCT is not far from the excellent internal validity of the individual RCT. Really good is good enough.