Digging in the Dirt - For Antibiotics


Not a week goes by without some claim of a new miracle antibiotic. Usually, when I read the press releases I yawn and go back to washing my hands. It's not like any of these magical compounds will ever make it to human studies. However, today's article in the NY Times describing a "powerful new antibiotic" piqued my interest. Dr. Kim Lewis from Northeastern University in Boston and her team just reported (Nature 7 January 2015) the discovery of a novel cell wall inhibitor called teixobactin. What was unique about their discovery was that they identified the compound by screening soil from a "grassy field in Maine." This is a big deal since 99% of environmental bacteria can't be cultured under typical laboratory conditions, so their method of "tricking the bacteria" into thinking they are back in their native 'dirt' is important.

Once the authors identified the compound teixobactin from the uncultured bacteria, they showed that it had excellent in-vitro activity against Gram-positive bacteria including enterococci, C. difficile, B. anthracis, and S. aureus (including VISA strains). (Table 1, below) They also tested the in-vivo efficacy against MRSA and S. pneumoniae in a mouse model and reported excellent results. Intriguingly, the authors said that "resistance has not developed...suggesting that the target is not a protein" and since there exists a similar lack of resistance development to vancomycin through mutations, they postulated "that teixobactin could be acting against the same (lipid II) target." 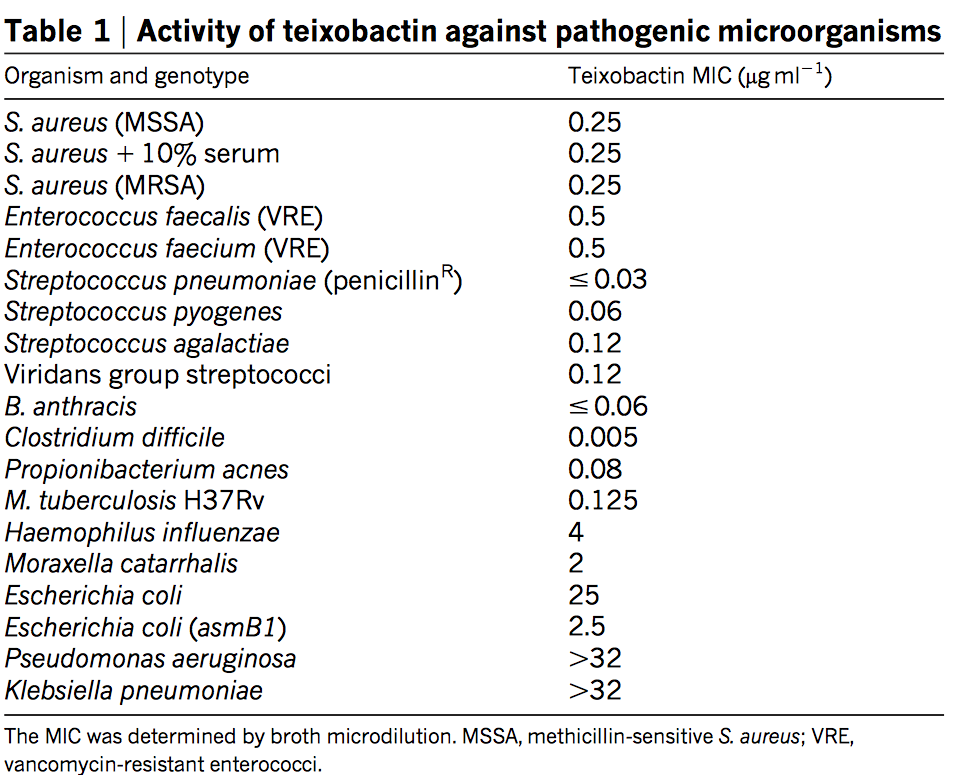 I agree with Dr. William Schaffner's comments in the NY Times as he called the study/method “ingenious” yet also cautioned that "it’s at the test-tube and the mouse level, and mice are not men or women, and so moving beyond that is a large step, and many compounds have failed.” I would add one additional caveat  - teixobactin had little activity against most Gram-negative bacteria including E coli, Klebsiella and Pseudomonas. (Table 1, above) Since the real resistance crisis is in multi drug-resistant Gram-negatives (think CRE, NDM-1), we better get back to digging in the dirt.