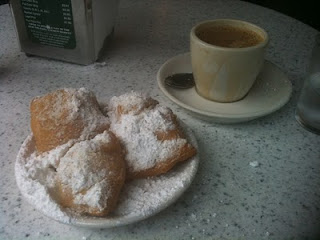 Just getting back from APIC - New Orleans. I've included this photo from Cafe Du Monde, where I broke "bread" with Titus Daniels, Tom Talbot and Keith Kaye. Thought I should avoid photos of people ingesting the beignets, especially those three guys.

While trapped in the Detroit airport (a freak storm flooded the gates and shut down the airport for a couple hours), I came across an interesting article in Ars Technica; a site normally associated with reviews of iPhones and Windows 7. The author Chris Lee discusses confirmation bias, a tendency for people to only look for data that confirms their prior beliefs, which permeates all of science and pseudo-science. He provides a number of nice historical examples of confirmation bias. I particularly enjoyed the end of the article where he describes what steps scientists can take to avoid confirmation bias including subjecting their work to as much internal and external criticism as possible. The "denier" section was good too. Can any of you think of examples of confirmation bias in infection prevention? Me neither.