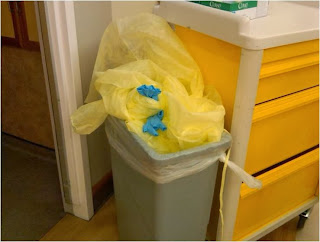 I was going to post some thoughts on the BUGG Study (and I did put a quick summary into an F1000 recommendation). However, I have little to add to the authors’ own discussion, Preeti Malani’s editorial, and Mike’s previous posts. In short: a great study that advances the field, and given the mixed results (primary versus secondary outcomes) it will be hypothesis-generating but not practice-changing. I do, though, have a couple related observations…

Second, the hypothesis being tested in the BUGG study is definitely swimming upstream, against what I perceive as slow movement away from contact precautions. Mike has posted about their new approach at VCU, but other centers have also moved away from the CDC MDRO guidance regarding use of contact precautions. I’m on an informal e-mail group of academic hospital epidemiologists, and last week one of them asked whether centers were still using contact precautions for E. coli-ESBL producers. The responses provided further evidence for a move away from isolating for E.coli-ESBLs, MRSA and VRE in some large academic centers. I suspect this represents the tip of the iceberg, particularly as hospitals seek to improve their patient satisfaction scores.

Of course, there’s a big difference between an ICU-specific universal glove-gown intervention and hospital-wide, microbiology-driven contact precautions use, and it is easy to hypothesize why the former would work better than the latter.
Email Post
Labels: BUGG contact precautions