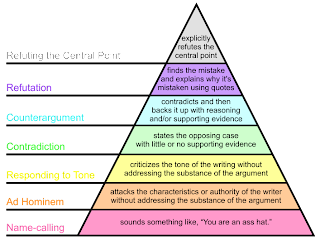 I was going to title this post "Making Shit Up" but then thought better of it. First of all, profanity can be offensive to some and for reasons that will hopefully become clear, there was a lot of crap written but some of it wasn't made up. It was just that it was twisted and some really great scientists and their science were denigrated. In addition, many scientists were mentioned in an unprofessional manner (first names?) and perhaps some points bordered on ad hominem. Thus, rather than limiting myself to name calling, which lies below ad hominem on Paul Graham's Hierarchy of Disagreement, I've decided to aim a little bit higher...so let me begin my counterargument.

First, please step away from this post and go read the 2-page commentary just published in AAC titled: "A Perspective on How the United States Fell behind Northern Europe in the Battle against Methicillin-Resistant Staphylococcus aureus."

Some thoughts. First, the authors suggest in their title that the US is falling behind Northern Europe in MRSA control. Little evidence is provided to support this claim other than that the proportion of S. aureus infections caused by MRSA is higher in the US. No mention is made of livestock-associated MRSA or MSSA or even MRSA related mortality. In addition, the authors focus on only one aspect as a possible cause for this difference between the US and Northern Europe - the US doesn't have legislatively mandated universal active detection and isolation (ADI).

The authors explain that everything would have been wonderful in the US if the 2003 SHEA guidelines recommending ADI were just followed. No mention was made of the fact that Northern Europe lies at the latitude of Anchorage Alaska and that environment might play a role. No mention was made of other potential differences that could influence the carriage rates of this human commensal. And when you read it closely, you realize the commentary authors aren't just upset that the US lacks mandatory ADI but conjure evidence that there's actually an anti-ADI conspiracy aimed at preventing legislative mandates. One supported by antisurveillance activists named Huang and Huskins, and mysterious JAMA Swiss folks, and Diekema and Climo and meddling yet unnamed kids like Weber and Edmond writing position statements and editorials closing cases.

According to Kavanagh et al. it all started with the 2006 HICPAC statement that suggested to consider ADI while requesting more evidence and the SHEA-APIC position paper in 2007 by Weber (and Huang and Huskins) that came out against legislative mandates for ADI. You see, according to Kavanagh and his colleagues, Huang and Huskins would later spend years writing grants and completing complicated and intentionally imperfect studies at a huge personal cost in a twisted antisurveillance plot! Even against these odds, the US Congress held a hearing to push through mandatory ADI but just then unnamed JAMA Swiss folks published a study finding universal ADI ineffective and Diekema and Climo agreed as much in their editorial. Even if we overlook the obvious conspiracy given the timing of the publications, how can these JAMA authors live with themselves suggesting high quality studies overwhelm prior uncontrolled quasi-experimental studies? - the nerve!

But it gets worse (or better)! The authors then highlight the VA MRSA study but suggest that the only reason it was published was that MRSA activists demanded it. And to further prove the conspiracy, they point out that this fantastic study was published in the very same issue of the NEJM as the Huskins STAR-ICU study finding no benefit of ADI. Yup - fact. They then mention limitations (however valid) of the STAR-ICU study while neglecting any potential limitations of the VA study. Very smooth.

The conspiracy theorists authors lose me a bit when they say the US demands surveillance for CRE and HIV and hepatitis C without evidence, and wonder why there's such a high bar for MRSA. It's just not fair!

Further evidence of a conspiracy is offered when they point out that two reviewers of an AHRQ systematic review were none other than the aforementioned Huskins and Diekema! And then it really gets strange. The authors point out that the AHRQ review gave more weight to the higher quality studies that were negative compared to poorly controlled studies that found a benefit. As I read this paragraph I almost become sad, as they basically lost the debate right there. They even mentioned hepatitis C screening again and plead that MRSA ADI evidence is maybe even probably hopefully better. Finally, the REDUCE-MRSA trial by Huang and the accompany editorial by Edmond were mentioned and criticized, you know, because.

They conclude with saying that this whole anti-ADI conspiracy has occurred with the sole purpose of avoiding legislative mandates. They correctly point out that the best way to avoid such mandates is to base clinical decisions on the best available evidence. Fortunately for our patients, that is exactly what we are doing now. We are using the best available evidence as produced by Huskins, Huang, Climo, Diekema, Edmond, Swiss folks like Harbarth and many other colleagues from our ever-growing, evidence-based field of infection control. You know, ADI may be indicated in some settings but not all settings and the way to determine where and when is through more high-quality studies. And there is no conspiracy.
Email Post
Labels: AAC Charlie Huskins Commentary conspiracy diekema Harbarth meddling kids Michael Climo michael edmond Mike Edmond MRSA Scooby Doo Susan Huang Swiss