Search and destroy is so last century... 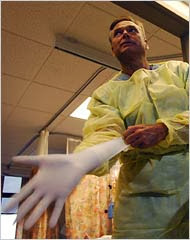 A few weeks ago, Dick Wenzel and I responded to a letter in the New England Journal of Medicine regarding our editorial on Susan Huang's paper on targeted vs universal MRSA decolonization. We have long argued that active detection and isolation (AKA search-and-destroy, a vertical strategy) wasn't a necessary or particularly wise approach. A letter refuted this. In our response, we stated:


The key question remains: given an optimally functioning horizontal program (i.e., near perfect compliance with hand hygiene and chlorhexidine bathing), what is the incremental benefit of a superimposed vertical strategy?

So we now have another study demonstrating the lack of need for active detection and isolation to control multidrug resistant pathogens. Will the search-and-destroyers finally pack it up and go home?