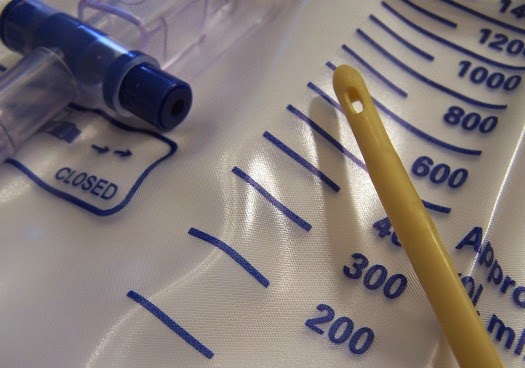 While I was attending the SHEA Meeting last week, a list-serve that I follow had some disturbing comments regarding how some hospitals are addressing CAUTIs that are due to Candida spp. I'll address those comments a little later, but first want to address the concept of Candida CAUTI.

To meet the NHSN definition of CAUTI, a patient could have fever + 100,000 CFU/mL of Candida in the urine, or fever + 10 WBCs/mL + 1,000 CFU/mL of Candida. While this definition is appropriate for bacteria, it really isn't for Candida. There's an excellent paper (free full text here) by Carol Kauffman, one of the world's experts on fungal infections, that clearly outlines why capturing "Candida CAUTI" is inappropriate. Here are a few excerpts from that paper:


Candiduria is often observed in hospitalized patients. Candiduria is neither a symptom nor a sign, and it is clearly not a disease. The finding of yeast (almost always Candida species) in the urine could mean that the patient has pyelonephritis or cystitis. It also could mean that hematogenous seeding of the kidney cortex has occurred in the course of disseminated candidiasis. Finally, and most likely, the presence of candiduria may reflect only colonization of the bladder, perineum, or indwelling urinary catheter. The vast majority of patients with candiduria have no symptoms suggesting the presence of urinary tract infection (UTI); culture of the urine is done because of unexplained fever, elevated WBC count, or less cogent reasons, such as cloudy or smelly urine.

The diagnosis of bacterial UTIs relies on the findings of pyuria and bacteriuria, usually at a certain minimum number of colony-forming units, in a patient with appropriate symptoms. Guidelines exist for establishing the diagnosis of a bacterial UTI, and the existence of excellent diagnostic tests allows appropriate treatment to be evaluated and become standard practice. However, the diagnosis of a UTI due to Candida species is much more difficult. No studies have unequivocally established the importance of pyuria or quantitative urine cultures for UTI due to Candida.

The overwhelming body of evidence points to the fact that the presence of candiduria as an isolated observation generally does not portend subsequent invasive disease. This finding should make it less imperative to use antifungal agents to treat patients who have candiduria.

I took a look at my hospital's CAUTI data for 2013 and found that 41% of CAUTIs in our ICUs were due to Candida. In our medical ICU, 94% of CAUTIs were associated with Candida. The absurdity here is that we are expending enormous amounts of energy trying to prevent an infection that really isn't an infection. But even worse, as pointed out in list-serve comments, some hospitals are now changing urinary catheters before obtaining cultures. If you were a patient, would you want your catheter changed every time a urine culture is obtained?  Other hospitals are empirically treating catheterized patients with fluconazole to prevent candiduria. This will only result in non-albicans colonization and fluconazole resistance.

This could be easily fixed by simply removing Candida from the case definition. It's time to stop punishing hospitals and driving inappropriate treatment. Wake up, CDC!
Email Post
Labels: CAUTI NHSN