Why are we dialing it up to eleven?

Yesterday, Dan posted an excellent summary of what's happening in US hospitals as they scurry to plan for the public health issue du jour--Ebola. He astutely points out that there seems to be a disconnect between what we know about Ebola transmission and what we're doing (or planning to do) with regard to safely caring for patients infected or suspected to be infected. I thought it would be interesting to examine what's driving the disconnect. As I see it, a number of factors are at play here:

As noted by Dan, at a press conference prior to the transport of two Americans with Ebola infection to Emory University Hospital, Dr. Bruce Ribner stated: "Emory University Hospital has been asked to accept two patients who are currently in Africa infected with Ebola virus infection. Our facility was chosen for this because we are one of only four institutions in the United States capable of handling patients of this nature." Not stated, but nonetheless presumed by the infection prevention community is that the agency doing the asking was CDC, given CDC's physical proximity and given that quite a number of CDC physician-epidemiologists hold faculty appointments at Emory's schools of medicine and public health. However, just a few days later, CDC's primary message was that any hospital in the US should be able to safely care for Ebola patients.

It's also difficult to reconcile the CDC recommendation for contact and droplet precautions--highly familiar to all healthcare workers--with the images of healthcare workers on the ground in the outbreak epicenters and in Atlanta dressed in Tyvek spacesuits. And who hasn't seen the video footage of the infected American doctor emerging from the ambulance in Atlanta also dressed in the same manner? However, it's important to keep in mind that the exposure risk for healthcare workers in the outbreak setting, caring for multiple very ill, infected patients with scarce resources, is far different than the controlled setting of the average American ICU.


Our greatest fears often revolve around areas where we lack experience, and very few healthcare workers in the US have ever cared for a patient with viral hemorrhagic fever. Importantly, not only does Ebola Fever have a high mortality rate and no proven effective therapies, there is also no post-exposure prophylaxis. A simple lapse in infection control protocol cannot be undone with a pill or injection. One way we attempt to manage fear is to overprotect: if one barrier works, two must be better. In general, redundancies mitigate risk, but this isn't absolute. As Dan pointed out in his post yesterday, we may inadvertently increase risk by complicating infection control protocols with gear that healthcare workers may find distracting, uncomfortable, and lack training to use. The litigious nature of American society also impacts our decisions regarding infection prevention strategies. And many healthcare workers, while willing to accept much greater health risks in their personal lives, demand zero occupational risk.


In many hospitals today, healthcare epidemiology staff have become advisors to hospital administrators who ultimately make decisions regarding the logistics of infection prevention. And their decisions may not be purely based on science. They often have aversion to approaches that would appear to be out of the mainstream of what other hospitals are doing, even if that's suboptimal. In addition, infection prevention seems to be increasingly used as a public relations tool. If you don't believe that, do a simple Google search and you will find scores of press releases published in local newspapers from hospitals who have purchased germ-zapping robots. By the way, I believe that one of the best uses for a hydrogen peroxide vapor robot would be terminal disinfection of the Ebola patient room. Perhaps those hospitals who have invested in this technology should be the first to receive Ebola patients.


In the run-up to the Iraq War, the Bush administration sought to engage the public health and medical communities in the war on terror. Much effort was devoted to preparations for bioterrorism. Who can forget the smallpox vaccine debacle? Preparedness was all the rage, and the Joint Commission couldn't resist jumping on that bandwagon.  Admittedly, some of the impacts of this were positive. For example, hospitals became more tightly linked to public health agencies and those agencies became much more engaged and proactive. But a new group of professionals emerged who are employed to make us prepared, and perhaps a little scared. A physician colleague who works in the IT world tells me that the constant fear mongering by IT security specialists is in part a job security tactic. So the folks who work in preparedness stand ready to help, perhaps in a more aggressive way than necessary this time. 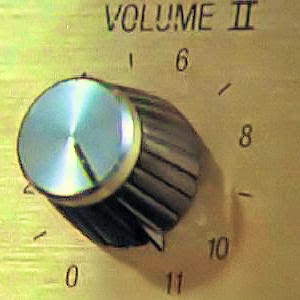 Ok, anyone still surprised we've cranked it up to 11? I'm with Dan in hoping that we'll be able to dial it down to 8 this week.