Is it time to ditch CHG bathing in ICUs and get back to basic infection control? 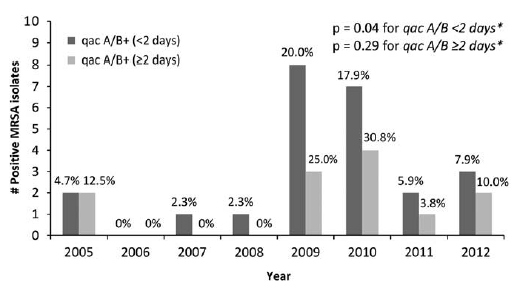 We are at an interesting inflection point in infection control. On the one hand MRSA is in decline and VRE has flat or declining incidence in many national samples. Yet on the other, we have largely pulled back from what is considered traditional infection control practice. It is important for us to understand what may be driving the declines in MRSA (and to a lesser extent VRE) and on what shaky foundation these declines are actually resting.

The recent MRSA decline is due to multiple factors including the underlying epidemiology of the pathogen, host immunity and the emergence of effective antibiotics targeting MRSA that are not named vancomycin (e.g. linezolid, daptomycin, ceftaroline). These factors are intertwined. For example, recent CA-MRSA strains have susceptibility to many existing antibiotics (e.g. clindamycin, tmp-sulfa), which highlights the complexity of the underlying reasons for MRSA's decline. I should also mention the antibiotics CHG and mupirocin here too, but I'll get back to them in a bit.

During the past decade, we've also seen a decline in the importance of basic infection control. Many of you will disagree with this statement but let me explain. The cornerstone of infection control has always been hand hygiene compliance and yet very little "honest" attention is paid to it. There is now so much pressure to report hand hygiene compliance rates greater than 90% that we have hit the target without actually improving compliance. Over and over in studies at hospitals across the US where we've looked, hospitals are reporting compliance rates over 90% and it's actually 40-60%, when we look closely with independent observers. Why does this matter? Because when we believe it's 90%, we ignore it.

On top of our hand hygiene conundrum, contact precautions are no longer favored for MRSA prevention. A bit of history - the second ever post on this Blog back in 2009 was titled: "Why I hate Contact Precautions, vol. 1." So there's not much love here for ye olde CP. Which brings me to the point of this post (finally) - when we no longer have hand hygiene compliance, gowns and gloves and when the foundation of infection control is based on antibiotics like linezolid, CHG and mupirocin, what will we do when the foundation begins to crumble?  Will we even notice the crumbling or will we stick our heads in the sand and ignore it?

Many of the gains in infection control over the past decade have rested on the foundation of CHG bathing. Ignoring for now that CHG might select for Gram-negative pathogens that have fewer effective therapies, CHG use might also select for CHG resistance through efflux pumps coded by qacA/B, which has been associated with MRSA decolonization failures. Yet the long-term (and after a decade, we are getting longish) effects of daily CHG bathing are not well described.

Into this void, David Warren and colleagues just reported in ICHE 8-year trends in the epidemiology of MRSA strains after initiating daily CHG bathing in their SICU. A random sample of 504 MRSA isolates were selected for analysis (63/year). Among all isolates from 2005 (when CHG bathing was implemented) to 2012, 7.1% were qacA/B(+). Somewhat disconcerting was the rise of qacA/B from 6.2% (2005) to 16.9% in both 2009 and 2010. Also concerning was the finding that 25% of qacA/B(+) MRSA isolates were mupirocin resistant. Results stratified by timing of nasal swab collection are in the Figure above. In explaining this increase the authors noted: "qacA/B(+) isolates from 2009 and 2010 were more likely to have ≥1 hospital admissions in the prior year, suggesting a possibility of an expansion of qacA/B(+) MRSA at BJH during this time period, which resulted in qacA/B(+) patients in those years being exposed in prior admissions."

So where do these findings leave us? Yes, more studies, larger studies, bigger and better studies - $6 million dollar man studies. But pending those dream-like studies, can we state at what level of CHG resistance we should ditch universal CHG bathing?  Are we compromising the effectiveness of CHG in preoperative settings like those supported by STOP-SSI? And when can we get back to basic infection control? To my knowledge hand hygiene and gowns/gloves don't drive resistance like CHG. Well, except resistance from my esteemed co-bloggers and colleagues. ¯\_(ツ)_/¯
Email Post
Labels: chg chlorhexidine contact precautions ICHE mupirocin