A decade ago, I was a young associate professor of Epidemiology at the University of Maryland School of Medicine in Baltimore. One afternoon I received a call from Dr. Trish Perl, then President of SHEA and crosstown colleague. Two years earlier, she and I had met when we assisted with the infection control of Bob, an Atlantic Bottlenose Dolphin at the National Aquarium, who had been diagnosed with Mycobacterium abscessus pneumonia. She was not calling about marine mammals this time, but rather was asking me to serve on the 2007 SHEA Annual Meeting Planning Committee, as the local "Baltimore" representative. It was an amazing experience. For one, it was when I met future colleague, friend and co-blogger Dan Diekema and other mentors and colleagues - see the 2007 AMPC roster below. 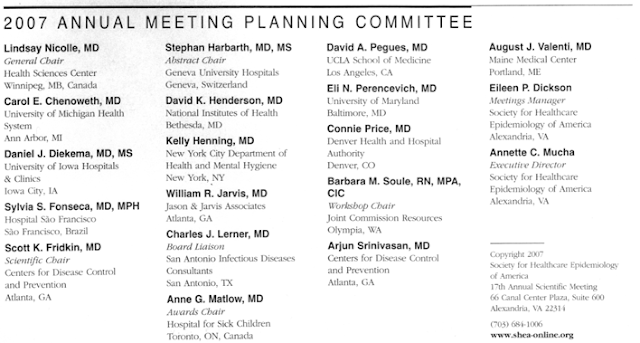 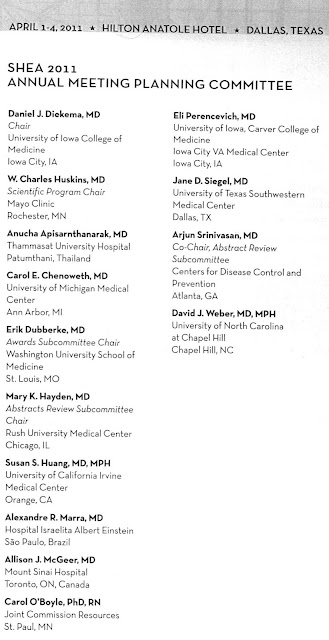 Over the years I've been asked to serve on many other meeting committees including the last old format SHEA Scientific Meeting in Dallas (2011) and the first combined meeting, IDWeek 2012. As 2016 represents my last year on the SHEA Program Planning Committee, I've been looking back over the old committee rosters and reminiscing. What struck me most, besides the amazing colleagues I've crossed paths with, is the overwhelming presence of MDs, specifically ID-trained, on the committees. Looking at the rosters from 2007 (above) and 2011 (right) and excluding SHEA staff, 94% were ID physicians over both years.

The preponderance of ID physicians is not surprising, given that SHEA was founded by ID physicians and our board of directors roster is made up of ID physicians. However, the science and practice of infection prevention and stewardship is evolving into a broader multidisciplinary effort. We now frequently collaborate and learn from a variety of well-trained scientists and clinicians including medical sociologists, medical anthropologists, epidemiologists, biostatisticians, human-factors engineers, infection preventionists, general internists, MBAs, health economists, pharmacists, microbiologists and health psychologists among others.

When faced with the daunting task of walking in the footsteps of prior co-chairs, Lindsay Nicolle, Scott Fridkin, Charlie Huskins and Dan, we recognized that we had an opportunity to broaden the appeal of the conference and strive towards a truly multidisciplinary program. So in 2015, working with the SHEA board and staff, Susan Huang and I convened a Program Planning Committee (figure below) with 42% of its members trained in fields other than infectious diseases.

This is not to imply that ~40% is the correct balance. Maybe it should be closer to the 15% of 2016. Perhaps future spring meetings will have an implementation focus and over 50% of the planning committee could be experts outside of infectious diseases and other years the focus could be diagnostics and the committee could be loaded with microbiologists.

The important thing is that we realize that clinical and scientifically, SHEA and our meeting should not be defined by what we were (ID physicians) and what we are not (APIC), they should be defined by what we hope to achieve. And if we truly hope to prevent healthcare-associated infections and the emergence of antimicrobial-resistant pathogens, we need more than ID physicians. Plus, I think it will be a lot of fun! 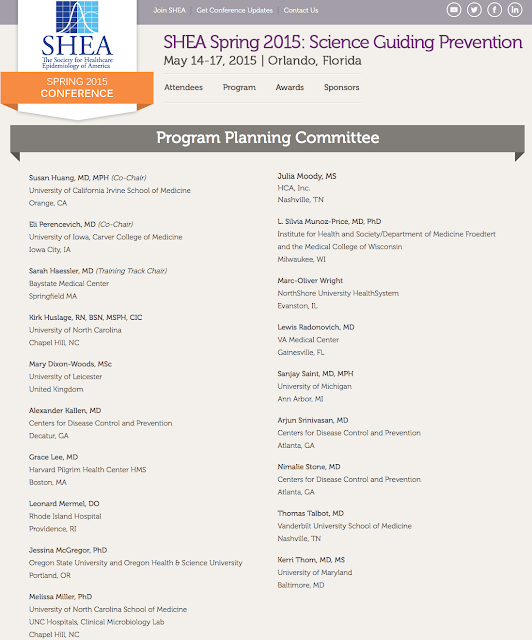