Skip to main content
Labels
Posted by Mike Edmond May 25, 2017

Several months ago I posted on the feud between the surgical community and the Association of periOperative Registered Nurses (AORN). This turned out to be a wildly popular post that generated a great deal of discussion on our blog and other websites. You'll recall that AORN outlawed the surgeon's skullcap in its latest guideline on surgical attire. This caused an uproar among surgeons who noted that there was no substantial evidence on which to make this rule.

In a new paper in Neurosurgery, a surgical group at University of Buffalo took matters into their own hands and decided to generate some evidence after their own hospital banned the skullcap and mandated that all OR personnel don bouffant caps. They compared surgical site infection rates for Class I (clean) procedures 13-months before and after the skullcaps were outlawed. During the study period, approximately 16,000 surgical procedures were performed. There was no difference in SSI rates between the two time periods.

So, my hat's off (no pun intended) to the authors. The score now is Surgeons 1, AORN 0. And I suspect that more studies are on the way. 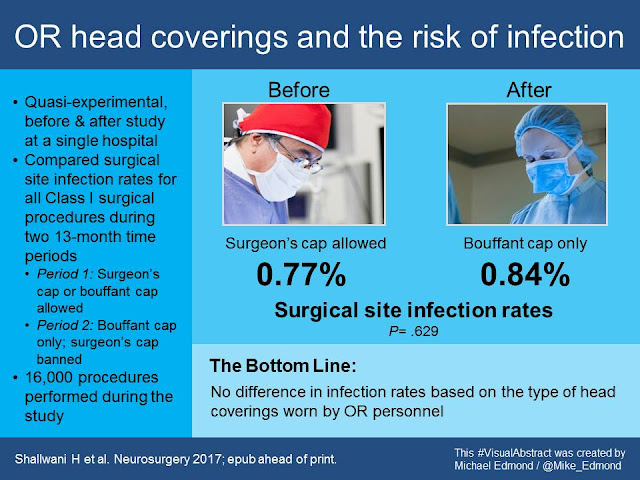