Skip to main content
Labels
Posted by Eli Perencevich May 20, 2017

When will the p-value finally die?

Over the past 7 years!, I've written about my concerns regarding the misuse of p-values, which I've dubbed "death by p-value." First and foremost, no one really understands what a p-value means and perhaps more importantly, a singular focus on a p-value threshold detracts from important concepts such as effect measures (e.g. hazard ratios) or the continuous nature of confidence intervals.

Recently, I've seen an increasing number of calls to hasten the death of the p-value from folks such as Ken Rothman (you might have read one of his books?) and Miguel Hernan. Professor Hernan has a request on twitter saying "statistical significance must go" where he is asking for examples of outrageous misuses of p-values. He's also suggested that "if your journal still uses 'statistical significance' in 2017, retire your statistical consultant."

Below, I've posted a letter to the editor by Professor Rothman and colleagues that he recently circulated. It has a nice brief example of how p-values are frequently misused. The key sentence, I believe, is this one: "given the expected bias toward a null result that comes from non-adherence coupled with an intent-to-treat analysis, the interpretation of the authors and editorialists is perplexing." I'll ask, are there situations such as studies of contact precautions or hand hygiene interventions where they would be analyzed using an intent-to-treat analysis and non-adherence levels might be high?

I'll leave you with this video on p-values from Carl Bergstrom at University of Washington. He and Jevin West have a course and planned book titled "Calling Bullshit: in the age of big data," which has been well received. And to connect this to MDRO, Carl is the author of a 2004 PNAS paper "Ecological theory suggests that antimicrobial cycling will not reduce antimicrobial resistance in hospitals", which is a nice example of how math models can improve our understanding of antimicrobial stewardship interventions. It's still worth reading. 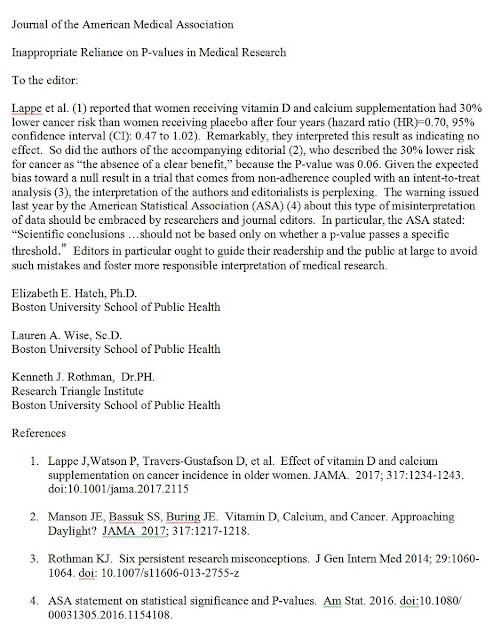