Super Sneaky MRSA (but only if you use PCR) 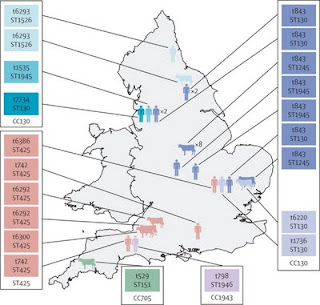 Lost in the din of our Rice Crispies or even the E. Coli outbreak in Europe, are a couple papers out of UK/Denmark and Ireland reporting novel mecA containing MRSA in human and bovine populations.  The concern here, of course, is that in many centers these novel MRSA strains would be missed by static PCR tests, which is what actually happened in these reports.

The report out of Ireland discusses two clinical MRSA isolates that were PBP2a-positive but mecA negative by conventional mecA PCR - ie they were called MSSA by GeneXpert. The first strain was isolated from a 64-year old in a Dublin acute care hospital, while the second was isolated from an 85 year-old in a South-East Ireland regional hospital. Evaluation determined that these strains contained a novel SCCmec element (Similar to SCCmec XI) with divergent mecA, mecI, mecRI, blaZ and ccr genes.

In the second report, investigators out of England noticed bovine MRSA strains which tested negative after standard PCR tests for mecA. They determined that they contained a novel mecA homologue, mecALGA251. They then searched collections in Scotland, England and Denmark for similar strains and 51 human isolates with the same mecALGA251. 14 of 25 from London, 12 of 16 from Glasgow and 24 of 32 clinical strains from Copenhagen contained the novel mecA. One human strain dated back to 1975, although detection increased substantially between 2007 and 2010. 54% (13/24) of the bovine isolates were also positive. The distribution of cattle and human isolates in England is shown above.

The authors of this paper suggest that new PCR primers will solve the problem. It is true that it will solve this particular problem, but is it a good long term solution?  Do we think MRSA evolution will stop here? Also, they suggest that dairy cows could be a reservoir of infection, but I would think that humans could also be the reservoir.

What this suggests to me is that if you isolate/decolonize patients using a static PCR for mecA, it is not surprising to me that other novel strains could emerge.  Hand hygiene would not be so easily circumvented, nor would simpler culture-based microbiology methods.

Hopefully our resident microbiologist Dan will chime in too...